From laser dermatology to the development of a transparent cranial impl.27-10-2020

The “Applications of Engineering in Medicine and Biology” Seminar series 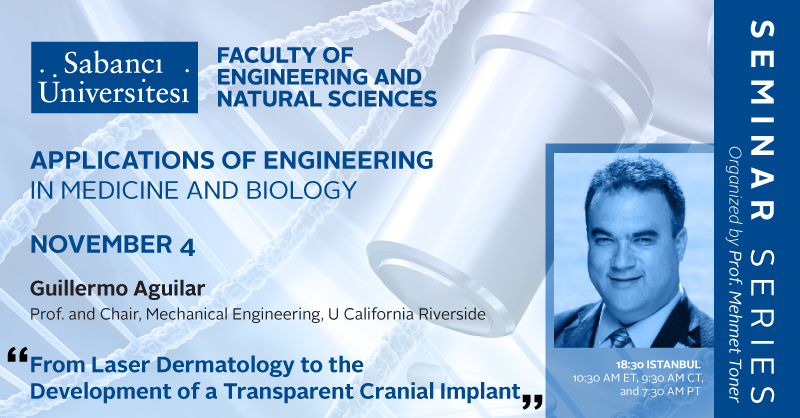 Since I started my tenure-track professor career at UCR in 2003, I founded the laboratory of Transport Phenomena for Biomedical Applications (LTPBA). Back then my group and I carried out studies aimed at understanding how lasers interact with biological tissue and how combined cooling and heating processes could improve diagnostics and therapeutics in dermatology. For example, we provided a better understanding of how cryogenic sprays could be used effectively to cool the skin during dermatologic laser therapy. Then, we looked at feasible ways to improve transdermal drug delivery by taking advantage of the thermal and mechanical property changes of tissue induced by cryogen liquid deposition on the skin surface. Later, another set of studies was aimed at using CW laser radiation to generate multiple vapor bubbles within a thin liquid layer, and to use the shockwaves these bubbles emit upon their collapse to perforate skin for enhanced drug delivery. Currently, the main research thrust in my group aims at developing a novel transparent polycrystalline Yttria-Stablized-Zirconia (YSZ) cranial implant (“window”) that enables life-long, noninvasive delivery and/or collection of laser light into and from shallow and deep brain tissue on demand. Such an implant would allow for real-time and highly precise visualization and treatment of diverse brain pathologies, such as those resulting from traumatic brain injury (TBI) or brain tumors, without the need of highly-invasive craniotomies or trepanation procedures. Various projects involving in vitro, in vivo, and fundamental research have yielded interesting results in connection with this “window”. Most of them involve various students working together across disciplinary boundaries. A summary of our approach, latest results, ongoing, and future studies will be presented during my talk.

Since 2003 Prof. Aguilar joined the Department of Mechanical Engineering at University of California Riverside (UCR), where he was promoted to Associate Professor in 2007, Full Professor in 2012 and since 2013 serves as the Department Chair. Prof. Aguilar has co-authored more than 100 journal publications, advised more than 13 postdocs, 55 students, including 28 graduate students (MS and PhD) and several undergraduate students and interns.

Prof. Aguilar has received research funding from various sources, including NSF, ASLMS, AFOSR, Sandia National Labs, NIH, etc. He has also received various awards, including his recent induction to the Mexican Academy of Engineering in July 2019.

Please click here to register The Applications of Engineering in Medicine and Biology seminar series. 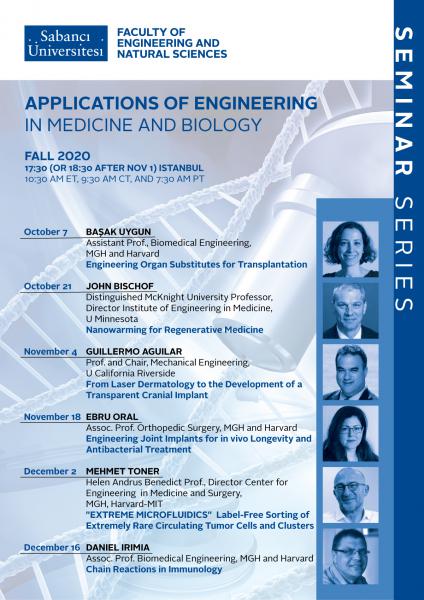