Title: Short- and Long-term Effects of Polarization on Electoral Volatility and Vote Choice

Abstract:  Employing a novel and comprehensive dataset on the outcomes of the presidential, general, and municipality elections between 2014 and 2019 in Turkey, the first study tests whether growing geographical polarization at the neighborhood (village) level decreases the vote transitions among the Turkish political parties and among their presidential and mayoral candidates over time. Differently from the first study focusing on a fragmented party system with proportional representation, the second study looks into the two-party system in the US and employs individual-level data from a series of nationally representative survey studies. Individual-level data enable us to take account of American voters' changing partisan, policy and, ideological attitudes in a longer time period, and model individual behavior using a novel estimator -- constrained choice conditional logistic regression (Moral and Zhirnov 2018). The CCCL model allows for modeling individual voters' choice-set compositions and assessing how those vary over time as a function of high and rapidly increasing elite, party, and partisan polarization in the US since the 1980s.

Bio: Mert Moral received his Ph.D. in political science at the State University of New York at Binghamton, United States, in 2017. He is assistant professor of political science at Sabancı University, Istanbul. His research interests include voting behavior, political participation, democratic representation, political polarization, political and survey methodology, and comparative and Turkish politics. His research has been published at, among others, American Journal of Political Science, Political Behavior, Political Research Quarterly, and Electoral Studies. Among others, Dr. Moral is the recipient of the Outstanding Young Scientist awards of the Science Academy, Turkey (BAGEP, 2018), and Turkish Academy of Sciences (TÜBA-GEBİP, 2020), and co-principal investigator of the Turkish Election Study (2018) and Istanbul Metropolitan Municipality Survey Study (2019). 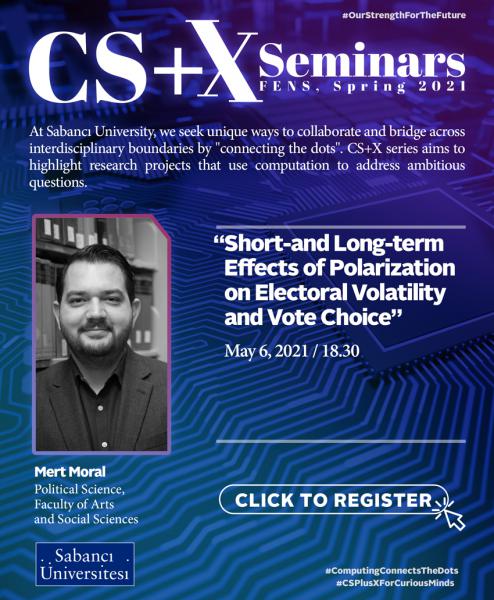