Laser curtains are a type of protective barrier. They are used in conjunction with Class 3B and 4 lasers to block direct and diffusely scattered laser radiation in excess of the maximum permissible exposure (MPE) limits from exiting into other areas. A barrier may be used at the entrance way to a dedicated laser laboratory, to cover windows, as a perimeter guard around all or part of an optical table, or during laser servicing and alignment.

Class 3B and 4 lasers are considered high power lasers and represent both an eye and skin hazard. Laser curtains provide protection by preventing the laser radiation from exiting the laser control area. Thus, they are intended to protect people outside the laser control area from accidental exposure. Laser curtains are not intended to serve as long-term beam blocks – they are rated by their ability withstand short term (i.e. 100 sec) exposures. Examples of blocks whose purpose is to terminate the beam within the laser control area for more than an incidental period of time are beam dumps, beam blocks and beam traps. The effectiveness of a laser curtain is a function of its ability to withstand damaging radiant exposures. This is evaluated by determining the burn-through time (penetration threshold level or PTL), which is a function of the incident power, material thickness and material type [a]. In addition and related, the laser curtain material must be fire-resistant. Class 4 lasers beams can result in potential fire hazards if materials are exposed to irradiances exceeding 10 W/cm2 or beam powers exceeding 0.5 W [b, c]. Under some situations where flammable compounds or substances exist it is possible that fires can be initiated by Class 3B lasers [b, d].

Figure 14.2 below displays the minimum requirements for laser lab clearance: 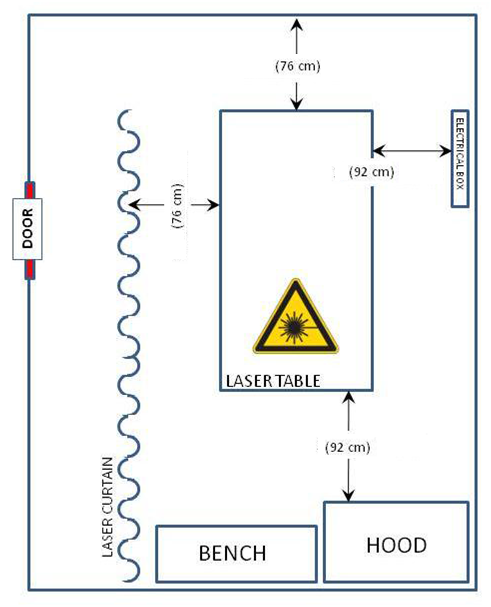 The testing protocol is based on the ability of a barrier to withstand beam penetration when exposed for 100 seconds at a maximum incident irradiance level. In addition, laser barriers should not support combustion or release laser gas air contaminants (LGAC) following an exposure. Barriers are tested over a range of beam diameters (3-10 mm) under standardized conditions. Evaluation is based on first appearance visible damage, power level at which beam breakthrough of the material occurs (penetration threshold level or PTL), and analysis of laser generated air contaminants (LGAC) if flame and thermal distortion or air contamination are observed. The standard ANSI Z136.7 specifies the minimum information to be provided on the barrier label by the manufacturer as the (1) threshold limit and exposure time for which the limit applies and the exposure conditions under which protection is afforded and (2) manufacturer and model number or barrier material [a].