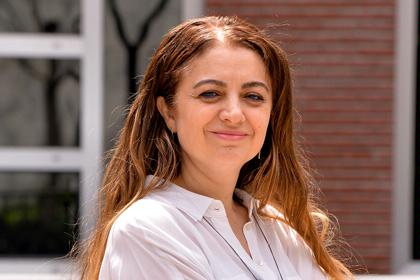 Selmiye Alkan Gürsel received BSc, MSc and PhD degrees from the Middle East Technical University Department of Chemistry and, as part of her doctoral studies, she carried out research on electrochromic polymers at the University of Florida (USA). She conducted post-doctoral studies on fuel cells in the General Energy Department of Paul Scherrer Institute. She has been working as a faculty member in the Materials Science and Nano Engineering Program at Sabancı University since 2008. She is directing and participating various international and national projects on fuel cells, polymer membranes, graphene, lithium-ion batteries, lithium -air batteries, electrolyzers. She participated in Graphene Flagship Project, in FP7 (Graphene-Driven Revolutions in ICT and Beyond) and Horizon 2020 (Graphene-Based Disruptive Technologies) phases as the primary investigator, scientific representative of the work package on fuel cells and national contact point from Turkey. She was awarded by L’Oreal Young Woman in Science Scholarship 2010, METU Prof. Dr. Mustafa N. PARLAR Research Incentive Award 2012, Science Academy -Young Academics Prize Scholarships (BAGEP) 2013. She received "Academic Prize" in the inaugural Women Energizing Turkey Awards endowed by the Turkish Ministry of Energy and Natural Resources in 2018. Tonguç Ünlüyurt received his BSc degree in Industrial Engineering from Bilkent University in 1994. He continued his doctoral studies at Rutgers University, NJ, USA and got his PhD degree in Operations Research in 1999. After graduation, he worked as a senior consultant in transportation industry for one year. Then he joined Sabanci University as a Faculty Member in 2000. Since then he has been teaching undergraduate and graduate courses in Operations Research and Industrial Engineering, with an emphasis on optimization related courses His research interests can be categorized as applications of combinatorial optimization in different areas including sequential testing, transportation and logistics systems and telecommunications systems. He worked as a Visiting Scholar at Brooklyn Polytechnic Institute in 2012.