Effect of Nanostructure Distribution on Energy Efficiency of Thermal-Fluidic Systems

Heat and mass transfer and fluid flow in such plain microchannel systems have been extensively studied in the last decade. Although there remain still many issues with plain microchannels, the state-of-the-art knowledge in the field is such that the heat transfer community is ready to face new challenges. Moreover, there is a strong need for more sophisticated second generation microfluidic systems to have a better performance. This project addresses this lack of information about second generation microfluidic systems having microchannels with modified surfaces.

Different from the state-of-the-art, this study focuses on the effect of the configuration of nanostructures on the enhancement of boiling heat transfer so that their potentialin perfor-mance enhancement could be exploited from a different perspective.

For this purpose, two configurations of nanostructured plates integrated into a rectangular channel are fabricated. The nanorod arrays are deposited utilizing glancing angle deposition (GLAD) technique on the copper thin film (∼50 nm thick) coated on silicon wafer substrates. Dimensions of the test section, heat flux values, and flow rates are chosen to ensure that nanostructured plates remain intact along with their nanorods in their original shape and position, so that the nanostructured plates could be used for many experiments. The first configuration consists of vertical Cu nanorods of length ~600 nm and average diameter ~150 nm with an average gap among the nanorods ranging from ~50 to 100 nm. These nanorods are grown in a randomly distributed manner on 50-nmthick Cu thin film deposited on silicon substrates with a thickness of 400 μm. The second configuration has the similar Cu-film/Si substrate but involves periodic structures having ~600-nm-long copper nanorods with an average nanorod diameter of ~550 nm and a center-to-center nanorod separation of ~1 μm. It was observed that no damage and disturbance in the structural integrity of nanostructures was evident during the experiments, where maximum wall superheat was fixed at 30ºC. Both nanostructure configurations of random and periodic nanorod arrays are successful to significantly enhance boiling heat transfer. A consistent increase (up to 30%) in heat transfer coefficients is observed on nanostructured plates compared to the Cu thin film, which is used as the control sample. No sig-nificant difference in the boiling heat transfer performance between the random and periodic nanorods was observed, which indicates that the distribution of nanostructures may not be very critical in achieving enhanced heat transfer. In light of the obtained promising results, channels with nanostructured surfaces are proven to be useful, particularly in applications such as cooling of small electronic devices, where conventional surface modification techniques are not applica-ble. 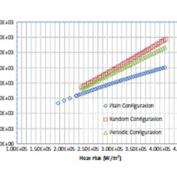 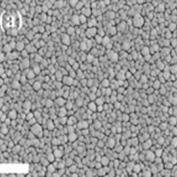 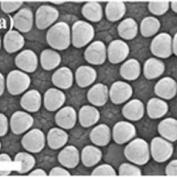