With the miniaturization of electronic devices, the functionality of such devices greatly increased due to the improvements in their packaging. While benefitting from miniaturization process, heat dissipated per unit area by such devices significantly increased. Therefore, the development of more effective and equally miniaturized cooling systems with enhanced surfaces generated by micro/nanostructures became a priority in order to preserve the functionality and stability of such devices.

An experimental study was conducted to investigate the effect of nanorod length on pool boiling heat transfer of water from nanostructured surfaces.

Three nanostructured plates featuring Si nanorods of three different lengths (900, 1800 and 3200 nm), which were etched through single crystal p-type silicon wafers using metal-assisted chemical etching (MaCE), were utilized to enhance pool boiling heat transfer. A visualization study on bubble formation and release from individual plates was conducted using a high speed camera to bolster the experimental results. The novelty of this study lies on its separation of the effect of varying nanorod length on heat removal performance in pool boiling.

Due to the increased active nucleation site density, and heat transfer area, nanostructured surfaces could enhance boiling heat transfer performance. Nanostructured surfaces significantly increase the bubble release frequency. As the length of the nanorods increases, the enhancement in heat removal performance deteriorates with the decrease in the bubble release frequency. Further enhancements with optimization studies using important nanorod parameters (nanorod size, spacing and length) are possible so that performance enhancements could become comparable to the existing commercially available enhanced surfaces. SEM images of the plates after the tests are obtained in order to prove the durability of the nanostructures under stringent operating conditions of this study. 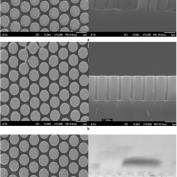 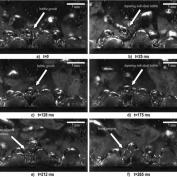