Efficient absorption of light in the active layer of solar cells and non-radiative recombination rates of charge carriers are two competing factors in conventional solar cell technology. By increasing the thickness of the active layer, light can be efficiently absorbed, however, charge carriers travel a longer path in the active material due to the increased thickness. This increase results in a high non-radiative charge recombination rate without contributing to the current generation, which reduces the overall energy conversion efficiency. By employing thin film solar cells, charge collection can be improved at the expense of low absorption efficiency. By decreasing the thickness of the active material layer, the distance that light travels is not sufficient for efficient absorption of a wide range of photon energies close to the band gap. This reduces absorption efficiency and energy conversion efficiency. While possible to obtain high power conversion efficiencies above 20% for some single crystalline materials with a thickness of a few hundred micrometers, high cost and energy demand to fabricate c-Si motivates research on thin film solar cells with nanoantennas for efficient absorption. 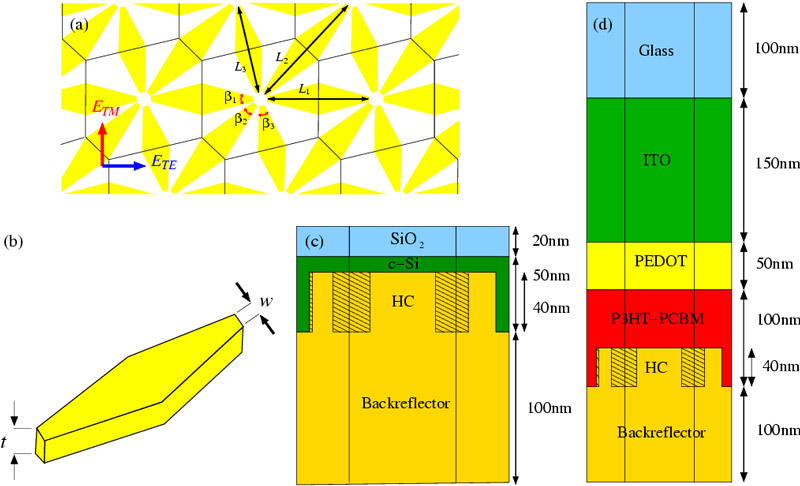 Sabancı University researchers achieved improved solar cell efficiency via a nanoantenna array structure that has a absorption spectrum conformal to solar radiation. Sabancı University researchers achieved the spectral broadening by breaking the symmetry within the Wigner-Seitz unit cell on a uniform hexagonal grid. For optimized designs, absorption efficiency enhancements of 106.2% and 20.8% are achieved for c-Si and P3HT:PCBM/PEDOT:PSS thin film solar cells, respectively.

To demonstrate this effect, Sabancı University researchers have used the structures that are shown in Fig. 1. This figure illustrates the schematic representation of the solar cells when honeycomb nanoantennas are embedded in c-Si and P3HT:PCBM/PEDOT:PSS solar cells, with active layer thicknesses of 50 nm and 100 nm, respectively.

In the literature, plasmonic nanostructures have been shown to increase the absorption efficiency in thin film solar cells via various mechanism, which include: (i) scattering of light by resonant plasmonic nanoparticles in active material at large angles to efficiently trap light in the active layer, (ii) increasing field intensity by localized plasmon modes around plasmonic nanoparticles embedded in the active layer, and (iii) trapping light by coupling it into surface plasmon polaritons propagating on the back metal-active layer interface. In this research, Sabancı University researchers identified that the localized modes are primarily responsible for the absorption enhancement with the honeycomb structures.