Storing high densities of charge in confined volumes such as electronic circuits is becoming an increasingly demanded but also challenging need in ever shrinking devices. Burç Mısırlıoğlu of Sabancı University together with his collaborators Arkadi Levanyuk (University of Washington) and Pamir Alpay (University of Connecticut) has shown the possibility to obtain very large dielectric response from sub micron ferroelectric-paraelectric artifically layered, periodically repeating structures, namely superlattices.

Such structures are on the agenda of research groups for charge storage in confined volumes but have often been studied with unrealistic assumptions and speculations. A full realistic treatment and understanding of these materials is unavoidable as with any other serious attempt for device design, which has become the main emphasis of this research followed by the prediction of very interesting properties of these systems.

Understanding how such structures achieve dielectric constants of a few thousand in a relatively wide range of temperatures is far from trivial. Ferroelectric oxides have a “intrinsic” polarization (permanent electric dipoles, a property only a handful of materials possess) that gives these materials their unique features. Measuring dielectric constant values around 100 or 200 from these materials is common practice and values of a few thousand can be reached near a critical temperature at which the ferroelectric polarization ceases to exist. Ferroelectric oxides such as BaTiO3 and PbTiO3 have rather high critical temperatures but doping these materials with other elements such as Sr that replace Ba and Pb atoms in the material have come about to be a way to reduce the critical temperature to near room temperature where very high dielectric response becomes a possibility. Very high density capacitors thus become a possibility.

Another option to precisely control the composition and therefore the properties is to engineer layered structures such as a layer of BaTiO3followed by another layer of SrTiO3 and repeat the same process as many times as needed. While this is possible with today’s modern processing equipment and techniques, predicting what the final properties and the capacitance (ability to store charge) of such a construct will turn out to be is not straightforward. How many layers does one need? Moreover, it is not even clear to the skeptical researcher right away whether high dielectric response is achievable by bringing two materials into contact in a periodic manner with each layer having a dielectric constant of around 100. It turns out that exposing the layers to one another as often as possible leads to stronger interactions between the layers that is mostly of electrostatic origin. It is this simple electrostatic interaciton that triggers highly non-linear phenomena in the layers.

In this research, using a thermodynamic approach, we were able to correlate the capacitance behavior of such structures to the number of layers needed, how thick each layer should be and the mechanism behind the experimental observation of dielectric constants at the order of thousands in these artificially engineered materials. We tried to address the question: How can one get a dielectric constant of a few thousand from two insulating materials with each having a dielectric constant not exceeding 100 or 200? The answer to this question lies within the small, periodic structural distortions occuring in the ferroelectric layer upon contacting the non-ferroelectric one. The nature of the interface between the two materials dictate the ferroelectric layers to form alternating polarization patterns propagating through the planes of the layers, namely “domains” which are absolutely responsible for very large dielectric responses that can be obtained from these structures. There exists a range of thickness and layer period when these “domains” in the ferroelectric layer can easily be manipulated to give rise to unprecedented dielectric constant and therefore capacitance even in very small volumes. We also demonstrated that this is a different mechanism than what has been obtained via doping of pure ferroelectrics. Our results point the way to fabricate submicron structures with very large dielectric constants for high density charge storage in low energy consumption devices and microelectronics in addition to tunability of properties depending on the need. 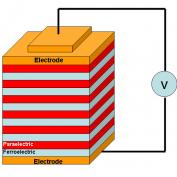