Owing to high energy efficiency and density, polymer electrolyte membrane fuel cells (PEMFC) are very attractive for transportation and stationary applications. However, commercialization of the PEMFC technology is hindered by problems such as high cost, complexity of the system, and durability of the polymer membrane, electrode and catalyst materials. As an improvement for automotive applications and to decrease the cost and the complexity of the system, in dead-ended anode (DEA) operation, the anode side is simplified by using dry hydrogen at the inlet with pressure regulators and shut by solenoid valves at the exit. However, in DEA operation, nitrogen in the air on the cathode side permeates through the thin polymer membrane and accumulates in the anode channels blanketing reaction sites and causing local hydrogen starvation, which leads severe voltage transients and the carbon corrosion in the catalyst layer on the cathode side . According to our experiments and modeling results, an ultra low flow rate in the anode does not hinder the hydrogen utilization, but is enough to release the nitrogen that accumulates in the anode, and remedies transient drops in the cell potential.

In a current project funded by TUBITAK, we are developing a PEMFC that consists of approxi-mately 10 cells with a large active area (approxi-mately 400 cm2), delivers about 3 kW at ultra low stoichiometric flows at the anode exit. Computa-tional models are used to design flow and cooling channels, which are appropriate for these operating conditions and the thermal management system.

Moreover, the project includes development of alternative materials for the membrane, elec-trodes and the catalyst layer to address adverse effects of the targeted operating conditions and the high cost of PEMFC systems. Against the membrane dry-out, degredation and pinhole deformation, high temperature polymer membranes will be developed. Against carbon corrosion, platinum nano particles will be placed inside carbon materials such as carbon fiber, graphite and carbon aerogel in order to improve the structural and electrochemical durability of the catalyst material. In order to reduce the cost of the platinum, Pt-Cu nano particles will be used as catalysts. Materials that are developed and characterized will be tested in a small single-cell PEMFC operating at DEA and ultra-low anode stoichiometric flow conditions. 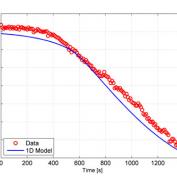