The proton exchange membranes are utilized as both the electrolytes and separators for PEM fuel cells. The development of cost effective proton exchange membranes to replace the state-of-the-art high cost perfluorinated membranes (e.g., Nafion® and derivatives) is an important challenge. The radiation induced grafting, a versatile technique allowing the functionalization of the base material for the introduction of a desired property, offers several advantages. First of all, there is no need to use an initiator or catalyst during polymerization. Secondly, since the starting polymer is already in the film form, there is no need for solution casting of electrolyte. Moreover, materials can be readily crosslinked during polymerization. In addition to these, materials are available at low cost.

Radiation induced grafting is based on irradiation of a base polymer by e-beam or gamma rays to create active reaction centers (mostly radicals). Then irradiated polymer is treated with vinyl monomer to produce a graft copolymer which can be sulfonated or doped to introduce proton conductivity.

Various base polymers (in the film form) and monomer combinations have been employed for the development of membranes by radiation grafting. Moreover, novel approaches for the synthesis of homogenous, highly conducting and low cost proton exchange membranes have been proposed. Unlike traditional radiation grafting method in which base polymer in the film form is used, base polymer in the powder form has been used in this study. Moreover, a novel monomer sodium styrene sulfonate has been used to eliminate tedious sulfonation step. Then, proton conducting membranes in the form of thin films have been obtained from copolymer powder simply by casting. By this means, the integration of base polymer and the monomer, and the uniform distribution of grafted chains have been achieved and consequently homogenous membranes have been obtained

Another approach for the synthesis of highly stable, durable, and low cost proton exchange membranes is to use of vinyl monomers contain-ing a spacer (atom or a group) between the dou-ble bond and aromatic ring have been employed during radiation grafting. It was shown that the spacer in the monomer enhanced the stability of the graft component against oxidative degrada-tion in fuel cell environment.

The work was supported by the Project Grants: 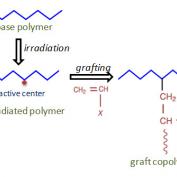