Fume hoods are used to prevent hazardous and odorous chemical exposure release to laboratory, laboratory users and the user.  Another substantial reason is limiting spill-affected area within hood and exhausting affected air. Inward air flow through the hood minimized material leakage out of the hood.

Fume hoods are substantial infrastructure element for handling hazardous materials . They should not be misused for the purposes such as garbage, storage of materials, equipment.

A fume hood should be used if a proposed chemical procedure exhibits any one of the following characteristics:

Procedures that can generally be carried out safely outside the fume hood include those involving the following:

The fume composed of several elements which are given below:

Face – The face of the hood is the space where air capture occurs.

Sash –  The sash is the glass “window” that moves through the hood face to protect the user and laboratory for the period of  time in use.

Baffles – The baffles are positioned behind the hood and direct air in the suitable direction. The baffles can also be regulated according to altering vapor densities of chemicals (heavier than air and lighter than air).

Duct – The hood and the ventilation system is attached by the duct and it exhausts to the open air.

Air foil – The air foil is positioned at the bottom front edge of the hood and is a vent that keeps a minimum gap open at all times but more importantly gives aerodynamic properties that allow better, less turbulent air flow and better capture.

In specialized cases, fume hoods will contain exhaust treatment devices, such as water wash-down for perchloric acid use, or charcoal or HEPA filters for removal of particularly toxic or radioactive materials. Fume hoods must not be used for work with infectious agents.

Variable Air Volume (VAV) – VAV hoods maintain a constant velocity as the sash moves but changes the volume of air. This can be done by a variety of methods including changing motor speed or closing or opening baffles in the duct. Decrease in air usage at lower sash height provides huge amount of energy savings on heating and cooling.

Standard or Bypass – Air volume varies according to the movement of the sash so that as the sash lowered the velocity decreases. Even bypass hoods have similar design but they have an additional vent at the tpo so that as the sash lowered and the sash space is closed, top vent is simultaneously activated, even though the sash opening is getting smaller, the proportion of air volume flowing through the face is smaller and the velocity remains more constant. Although, performance of bypass hoods are better than standard hoods, they are worse than standard hoods in context of energy saving.

Auxiliary Air – These hoods additional air-injecting blower at the face of the hood. Auxiliary air type hoods are out-of-use owing to their lower performance than VAV and bypass hoods.

Ductless hoods – These hoods are not ducted to outside air but remove contaminants from the air and return it back to the room.  HEPA filter, carbon adsorption or catalyst reaction filter may remove the contaminants. Filters should be used in recommended time of use given by the manufacturer. Appropriate filter choice according to your contaminant also plays important role. It is quite important that these elements work properly since the air is reticulated and exposure is eminent. Filter selection and proper working condition must be conducted by LS/LSS. LS/LSS should also consult with laboratory users to evaluate each chemical used in that hood. New chemicals should be informed to LS/LSS for evaluation.  Unless the benefits outweigh the hazards and inconvenience because potential for problems, ductless hoods could pose danger. Also, ductless hoods are not indicated when using many liquid, non-aqueous chemicals since the vapors of these chemicals are heavier than air and ductless hoods do not generally have a rear baffle. As a general rule the use of ductless hoods is not recommended.

Clean hoods – Clean hoods are sometimes called laminar hoods but these are different from the type of hood mentioned below.

Design of these hoods are based on preventing the work area with HEPA filtered air from contamination. High incidence of air drawn to the hood is filtered and drop gently from the top of into the work area and small percentage (%10) is drawn through the face of the hood.  Face velocities of clean hoods are lower than other hoods, however, the hood is designed to capture with high performance in this form. Due to this capture capability, it is important to have a visual capture test (such as a dry ice test) done on these hoods at least annually.

Before using a fume hood:

Figure 4.1 and 4.2 show the effect of material placement to working conditions: 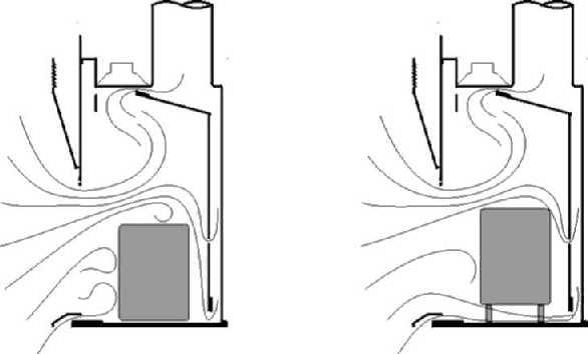 Annual testing and inspection of fume hoods are coordinated by LS/LSS and performed by the authorized company (manufacturer). The fume hood inspection program consists of a detailed preliminary inspection followed by annual standardized inspections for all fume hoods on campus. This initial inspection will offer baseline information including, but not limited to, hood utilization, category of hood, room and building information, and average face velocity capacities.

Follow-up inspections for appropriate procedure and face velocity (airflow) measurements will be performed on an annual basis and upon request by laboratory users. Upon accomplishment of each inspection, hoods will be categorized with an inspection sticker indicating face velocity, date inspected, and initials of the inspector. File including inspection datas will be kept in database.

Fume hood testing and inspection consist of the following:

A fume hood that has not passed the authorized company inspection and has a warning sign attached, even if the fume hood appears to have airflow is not allowed to operate.  Laboratory users must arrange or coordinate with other available laboratories with operational fume hoods if their work necessitates the usage of a fume hood.

LSS will coordinate fume hood repairs with the Operational and Technical Services unit to ensure a timely and accurate repair process.