The severity and effects of an electrical shock depend on a number of factors, such as the pathway through the body, the amount of current, the length of time of the exposure, and whether the skin is wet or dry. Water is a great conductor of electricity, allowing current to flow more easily in wet conditions and through wet skin. The effect of the shock may range from a slight tingle to severe burns to cardiac arrest. Table 10.1 shows the general relationship between the degree of injury and amount of current for a 60-cycle hand-to-foot path of one second's duration of shock. While reading this chart, keep in mind that most electrical circuits can provide, under normal conditions, up to 20,000 milliamperes of current flow.

In addition to the electrical shock hazards, sparks from electrical equipment can serve as an ignition source for flammableor explosivevapors or combustible materials.

Loss of electrical power can create hazardous situations. Flammable or toxic vapors may be released as a chemical warms when a refrigerator or freezer fails. Fume hoods may cease to operate, allowing vapors to be released into the laboratory. If magnetic or mechanical stirrers fail to operate, safe mixing of reagents may be compromised.

Even if an individual survives a shock episode, there may be immediate and long-term harm on tissue, nerves, and muscle due to heat generated by the current flowing through the body. The heat generated is basically resistive heating such as would be generated in heating coils in a small space heater.

The scope of the effects of external electrical burns is usually immediately apparent, but the total effect of internal burns may become manifest later on by losses of important body functions due to the destruction of critical internal organs, including portions of the nervous system, which is especially vulnerable.

If a victim has resistive heating burns; you should apply “Burn Kit”, then call Health Center (7666).

Induction motors should be used in most laboratory applications instead of series-wound electric motors, which generate sparks from the contacts of the carbon brushes. It is vital to use non-sparking motors in pieces of equipment which result in considerable amounts of vapour, such as blenders, evaporators, or stirrers. Equivalent ordinary equipment or other items such as vacuum cleaners, drills, rotary saws, or other power equipment are not suitable for use in laboratories where solvents are in use. Blowers used in fume exhaust systems should at least have non-sparking fan blades, but in critical situations with easily ignitable vapors being exhausted, it may be worth the additional cost of a fully explosion-proof blower unit.

Any device in which an electrically live circuit makes and breaks, as in a thermostat, an on-off switch, or other control mechanism, is a potential source of ignition for flammable gases or vapors. Special care should be taken to eliminate such ignition sources in equipment in which the vapors may become confined, as already discussed for refrigerators and freezers. It is also possible in other equipment such as blenders, mixers, and ovens and the use of such devices should not be permitted with or in the vicinity of materials which emit potentially flammable vapors.

Spark ignition can cause electrical fire damage in the laboratory. In such cases; the laboratory must be evacuated and the Call Center must be called (9988).

There are various ways of protecting people from the hazards caused by electricity, including insulation, guarding, grounding, and electrical protective devices. Laboratory users can significantly reduce electrical hazards by following some basic precautions:

Any of the following circumstances requires that the user immediately take the equipment out of service:

Live parts of electric equipment operating at 50 Volts or more (i.e., electrophoresis devices) must be guarded against accidental contact. Plexiglas shields may be used to protect against exposed live parts. Figure 10.1.a displays the safety fuse used in Sabancı University. 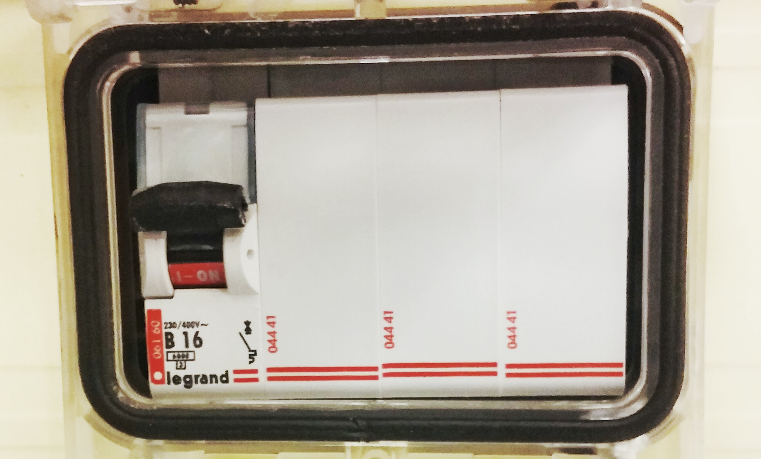 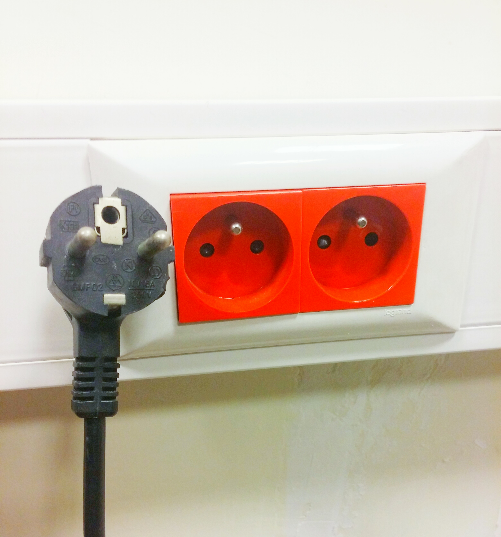 Only equipment with two-prong plugs should be used in the laboratory. The two prong (Figure 10.1.b) provides a path to ground for internal electrical short circuits, thereby protecting the user from a potential electrical shock.

Circuit protection devices are designed to automatically limit or shut off the flow of electricity in the event of a ground-fault, overload or short circuit in the wiring system. Fuses and circuit breakers prevent over-heating of wires and components that might otherwise create fire hazards. They disconnect the circuit when it becomes overloaded. This overload protection is very useful for equipment that is left on for extended periods of time, such as stirrers, vacuum pumps, drying ovens, Variacs and other electrical equipment.

The ground-fault circuit interrupter, or GFCI, is designed to shut-off electric power if a ground fault is detected, protecting the user from a potential electrical shock. The GFCI is particularly useful near sinks and wet locations. Since GFCIs can cause equipment to shut down unexpectedly, they may not be appropriate for certain apparatus. Portable GFCI adapters (available in most safety supply catalogs) may be used with a non-GFCI outlet.

Although some newer items of equipment have spark-free induction motors, the on-off switches and speed controls may be able to produce a spark when they are adjusted because they have exposed contacts. One solution is to remove any switches located on the device and insert a switch on the cord near the plug end.

The following practices may reduce risk of injury or fire when working with electrical equipment: